From Ritual to Theatre, 2010, Ancient and Modern, London 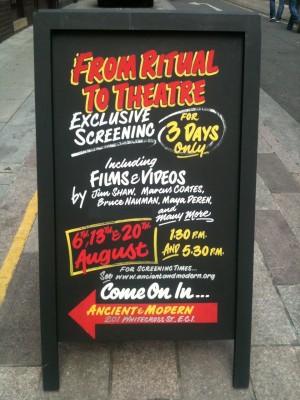 Judd curated a series of artists’ films that explore the grey area between performance and ritual. The artists reuse the signs, codes and mannerisms of rituals, rites and ceremonies. Through their restaging, these events, both everyday and profound, are used as readymades, re-exploring their value and cultural status. The artists locate themselves at the fulcrum where one position begins to slip into another, the shimmering point where fixed positions begin to waver.

From Ritual to Theatre explored the paradox of the parameters and freedom that self-imposed ritual provides. In relation to the cultural and historical baggage that these ritualistic acts suggest, the role of the initiate was explored, a position which has a strangely exempted status. For anthropologist Victor Turner, the initiate occupies an ambiguous territory where they remain “neither here nor there … betwixt and between the positions assigned by law, custom, convention”. During the liminal or transitional phase of any ritual activity the characteristics and laws of the dominant social structure are momentarily collapsed, as “the ritual subjects pass through a period and area of ambiguity” where “they are at once no longer classified and not yet classified”.