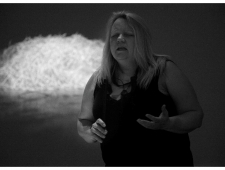 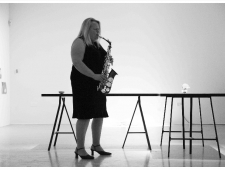 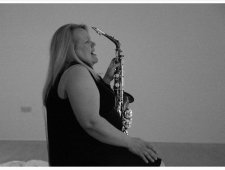 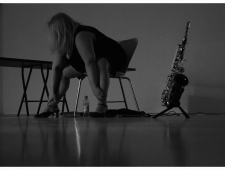 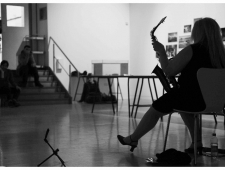 Judd’s performance with the musician Denise Boyd, in response to the work of Traci Kelly

When Judd was approached by the artist Traci Kelly to respond to her work he started thinking about ways in which the work could be ‘enacted’. Traci sent him some text which was an introduction to the project, and it included two references that seemed to connect with his own interests. One was a quote by Erin Manning in which she writes ‘The proposition is that touch – every act of reaching toward – enables the creation of worlds. This production is relational.  I reach out to you in order to invent a relation that will, in turn, invent me.’ In the text Traci also wonders ‘if its possible for research to have any context in which, raising the stakes from pleasure, it can pursue jouissance; and whether bliss may be its guide.’

The work that Judd was invited to respond to consisted of 10 monoprints laid out on several tables, which depict the artist sitting on a chair, her posture changing from slumped forward to sitting upright. Other aspects of the images also change throughout the series, such as the register of the ink on the paper, the artist’s face obscured by gold leaf, and the introduction of a cup containing gold leaf next to one of the pictures. The images, in part, reminded Judd of some aspects of his performance work, in which actors and audience are seated, often in concentric circles, and undergo a period of transformation, during which they gradually emerge or ‘come together’ in increasingly unifying cycles of song, spoken word and movement. Therefore the ideas of touch as a relational action, which in turn has an impact on both the person reaching out and the person being touched, seemed to resonate, as did the notion of jouissance, and the possibility of reaching, at the work’s climax, some kind of altered state.

Judd was keen to work with Denise Boyd, a musician based in Nottinghamshire, who he had worked with before. He imagined her almost as a medium who could channel the work through song and music; Bonington Gallery is a big, beautiful space and he thought of her music and voice gradually building up and resonating. Judd invited her to the gallery to look at the work.

Ben Judd: It felt like quite a challenging experiment, in some ways, to see how my work, yours, and Traci’s might collide, overlap or interact. Although it seemed that through our initial conversation, and through looking at and discussing the work, it was fertile ground for a collaboration.

Denise Boyd: Despite the challenging aspects, knowing your work and practice methods and having a strong, almost overwhelming connection to the monoprints, the first viewing indicated indeed there was a strong foundation to proceed.

BJ:  Could you say a bit more about the strong, overwhelming connection?

DB:  After perusing the text the idea of bliss and live performance was forefront in my mind before visiting the gallery. The prospect of our imminent project, and the accessible presentation of Kelly’s work with relevant subject matter; I found this stimulating. In addition we had decided to work as a duo: that for me made a very exciting proposition.

BJ:  We discussed the idea of working within a structure, or with a set of physical boundaries (which Traci’s work could embody) and how we might develop improvisation within that structure. The idea of something being both fixed and fluid at the same time.

DB:  Yes we decided to embrace the project using a progressively developing performance, incorporating a structured improvisation, which is a significant link between our practices. An important idea was to use a chair with myself reflecting poses of Kelly’s work. The monoprints for me had an implied progression where the actions felt linked in a series that had a significant meaning rather than being separate, inert poses; they were both fixed and fluid. After the viewing my connection to the monoprints grew. My connection to the ’blacked out’ image with the figure of Kelly slumped forward felt like a definite starting point, as if she was separated from bliss, and the table with the gold cup cascading represented a heightened or blissful state in which she was connecting with outside of herself and outside of her work. Over the next five days my senses were heightenedand I produced the song Waiting for Bliss, which in different ways incorporates all of our practices.

BJ: We built the performance up in three cycles, starting from you sitting slumped forward, emerging to sitting upright and eventually walking around the gallery. Music was gradually introduced, beginning with an electronic wind instrument which produced a low, resonating sound, to a simple tin whistle and alto saxophone, which eventually filled the space. You also started each cycle by using words from your song as spoken word, intermittently, which gradually built up into louder proclamations and singing. It was an impressive feat to witness, not least because it was repeated three times in a row, each time as if you were starting from scratch. You were clearly deeply emotionally engaged in the performance, and seemed exhausted afterwards.

DB: The electronic wind instrument has very low bass notes which reflected the ‘darkest’ mood in the monoprints, leading to the happier tin whistle and the more upright poses, and finally the brighter, louder saxophone for the climax and the last set of monoprints. The performance reached a zenith where I felt most connected and at which point I might connect to others in a state of heightened bliss or jouissance. It was an exhausting process as the first cycle was very emotional and so I had to control this in order to proceed. The song had three verses and celebration chorus to reflect each part of the cycle. ‘From where I stand I can see you all covered in gold’ was a reference to a vision of myself or Kelly experiencing a state of bliss. You have to believe totally and be immersed in the moment or the bliss cannot happen.

BJ: I am very interested in this idea of immersion, particularly as a performative mindset, or altered state. To achieve this state requires, I imagine, total belief that what you are enacting is real. I’m curious about how this happens for a performer, and how removed or connected you are from the reality of the event. I imagine it almost as a ritual, in which you might go through a period of transformation.

DB: The performance was a way of exploring this immersion process. The disconnected or distanced first stage felt the most convincing. The immersion process happens outside of aspects of everyday life or rituals which are really just ‘going through the motions’, that is what makes the process so elusive. Being in the moment, belief in the process and connecting to an audience and/or other participants play an important part. Structured improvisation is an excellent way of at least attempting to achieve this elusive, immersive state.